No longer a secret, YouTube is the golden goose of Google 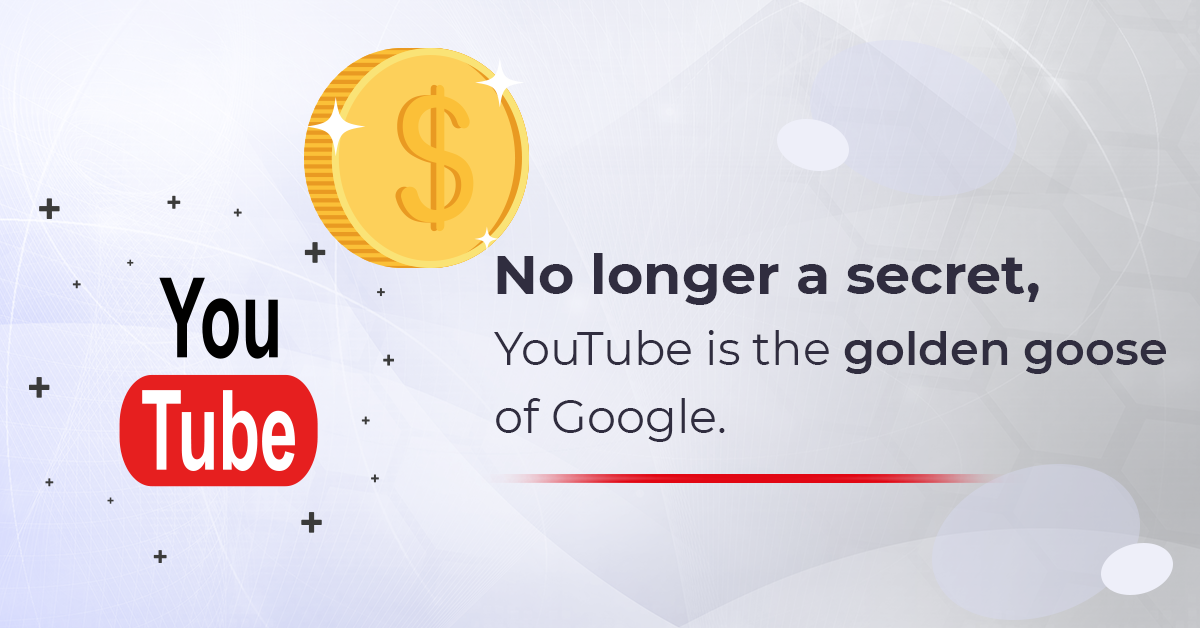 It is not a secret anymore….

Google bought YouTube in 2006 for $1.65 billion. The world’s biggest search engine has acquired more than a handful of businesses in the past. But it’s safe to say that none have been as successful as YouTube, both financially and in terms of reach. All these years, Google has not been very forthcoming of how much it makes through YouTube alone and YouTube’s earnings were historically consolidated with Google’s other revenues.

For the first time, in 2020, Alphabet has decided to spill the beans. The American conglomerate revealed that it made $15.1 billion in revenue in fiscal 2019 from YouTube ads alone, which is approximately 10 percent of all Google revenue. And the $15.1 billion number includes $4.7 billion during the fourth quarter of 2019.

YouTube has enjoyed tremendous growth as per these released numbers. From $8.15 billion in the fiscal of 2017 to $11.15 billion in fiscal of 2018 under CEO Susan Wojcicki and then this $15 billion in 2019, the growth is clearly robust. In other words, YouTube nearly doubled its ad revenue in the past two years. Contextually, one could say that $15 billion in 2019 in ad revenue proves that YouTube beats media conglomerate Viacom, a $12 billion-business as per its last value. This also puts YouTube above 20% of the $70 billion spent on the entire TV ads in the US in 2019.

Where the revenue is coming from…

Alphabet disclosed the figures in its three-monthly earnings statement.

According to Ruth Porat, Alphabet CFO, the decision to divulge YouTube revenues was taken to provide the industry, the company’s stakeholders, and the general public increased insight into Google’s business and future opportunities.

Sundar Pichai, Alphabet and Google CEO, informed analysts and reporters that YouTube TV has over two million subscribers. YouTube Premium and YouTube Music, on the other hand, boast over 20 million premium subscribers put together.

Most of YouTube’s revenue is from the ads that run on the platform. Upon comparing this ad revenue to Facebook, YouTube’s ad earnings are approximately a fifth of the social networking sites ad business and are more than six times bigger than the advertising money made by the Amazon-owned Twitch.

Though Google revealed all this essential YouTube’s ad revenue information, it still failed to disclose whether it makes profits on YouTube or not. The limited report left a lot of unclear information about the company as other revenue sources were yet not disclosed.

However, Alphabet CEO Pichai has made open the company’s plan for more transparency since his promotion and the co-founders’ decisions to step down and limit their day-to-day operations.

No doubt, the disclosure clearly indicates how massive of a business arm YouTube is to its parent company. The ad-leveraged video sharing platform, which Google bought more than a decade ago, has been the company’s crown jewel for years together.

Revenue from YouTube’s premium subscriptions has been pooled into the ‘’other’’ category all these years. The category made $5.3 billion in 2019 fourth quarter, which includes revenue from sales of hardware such as Google Home speakers and Pixel phones too. Since multiple businesses contribute to the ‘’other’’ category, it is not easy to ascertain what were the specific contributions of each business. Therefore, the current clear demarcation of YouTube’s ad earnings is historic and significant.

Overall, Alphabet made close to $46 billion in the quarter ending December 31, 2019, which is a 17 percent increase over 2018. Approximately $10.7 billion of the $46 billion was profit, according to the company. Alphabet boasts a sprawling empire, of which the big money-maker is still Google’s search business, which made $27.2 billion in revenue during the fourth quarter of 2019.